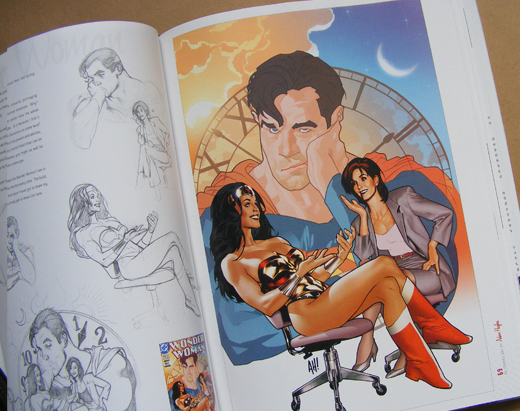 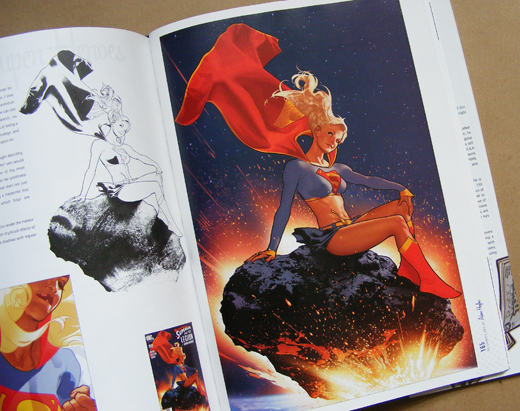 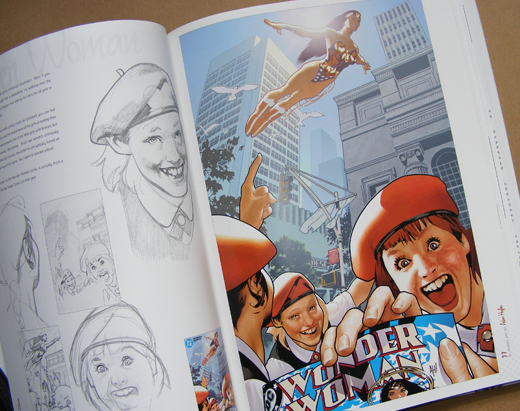 Another recent addition to the Inkwell Studios library- Cover Run: The DC Comics Art of Adam Hughes (DC). In the comics world, they're called Good Girl Artists- the illustrators who specialize in drawing fetching young women, often wearing tights and capes (the characters, not the artists). The late Dave Stevens revived interest in Good Girl Art with the Rocketeer, but Adam Hughes is its best-known practitioner. Unlike so many comics artists who fall into a cookie-cutter sameness that passes for style, Hughes has kept pushing his technique in new directions. Lately he's been creating his covers as grayscale marker drawings and then coloring them in Photoshop. He's also incredibly well-versed in illustration history: look at the nod to Maxfield Parrish in the Supergirl cover above, and to Norman Rockwell in the Wonder Woman "Girl Scouts" cover. And he has a great sense of humor- I love that image of Superman cooling his heels while Diana and Lois engage in a little late-night girl talk. AND, if that weren't enough, he and his wife Allison are two of the coolest people in the comics world.
Posted by Michael Gelen, Inkwell Studios at 6:42 PM

Email ThisBlogThis!Share to TwitterShare to FacebookShare to Pinterest
Labels: Inspiration

Michael Gelen, Inkwell Studios
I'm an illustrator/designer living in Buffalo, NY. I work on a wide range of projects, but have a particular fondness for art deco posters, vintage cartoons, golden age comics, pinup art- the whole vast and roiling detrital field of twentieth century commercial art. This blog is intended to chronicle and catalog not only my work, but also the extraordinary things I stumble upon everyday.